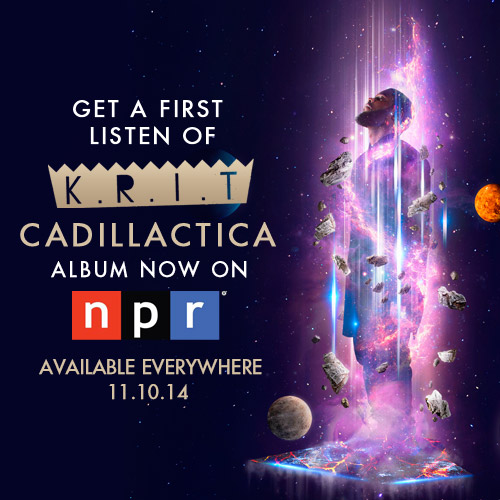 Big K.R.I.T. isn’t supposed to still be here. Three years ago, the rapper and producer entered the mainstream rap world on the cover of XXL Magazine’s 2011 Freshman class issue — arguably the best ever, including as it did Kendrick Lamar, YG, Mac Miller, Meek Mill and Lil B. More than half of the musicians so anointed then are building laudable, and original, bodies of work. Some of them are also commercially viable. And Big K.R.I.T., without a breakout hit and despite his aversion to bandwagons, is as highly regarded, mentioned and anticipated within the hip-hop world as those more recognizable names. K.R.I.T. seems to be sticking to a formula established by his fellow southerners, UGK and 8Ball and MJG: talent is enough. But if you know the histories of those two groups you’ll remember that it’s no minor miracle their skill and creativity surmounted industry obstacles.

K.R.I.T. comes from Meridian, Miss., which lies 92 miles west of Jackson, home of the Sonic Boom of the South, as he takes care to note. Southern sounds prevail in hip-hop today, but most rappers at the top of the charts don’t present the emotional complexity of their predecessors. K.R.I.T. raps about what many rappers probably want to discuss (spirituality, discrimination, insecurity) but are afraid to. It’s this strain of authenticity that’s cemented his place in the hearts of his fans, even through changes in his production work. After a string of mixtapes, including the pivotal K.R.I.T. Wuz Here and Return of 4eva, he released his major label debut in 2012. Live From The Underground was praised by critics, but some of his fans felt it left something to be desired. What they were missing were the samples he was able to use freely on his tapes — the projects he released free of charge to his audience. Any album he (and Def Jam) wants to sell must go through the clearance (and payment) process. K.R.I.T. dropped another mixtape last year, but 2014 finds him in album mode once more.

Vocally, he’s at the top of his game on Cadillactica. Unlike the million and one responses to Kendrick Lamar’s “Control” verse of last summer, in which the Los Angeles rapper called out his competition by name, K.R.I.T. countered by stepping to the plate and elevating what he does on the mic. Here his delivery is aggressively relaxed, not angry. The chip on his shoulder remains, but it sits comfortably. He goes real quick without ever losing his dignity.

Production-wise — though from that point of view Cadillactica isn’t really comparable to his mixtapes, because the samples aren’t here — K.R.I.T. proves he can work within the system to make records that adhere to his style. He does throw a light jab at Def Jam on “King of the South,” and then he and Raphael Saadiq work a guitar loop through “Soul Food” that thoroughly succeeds in creating the texture of a sample-based record, the kind of song that feels like the front porch on a Sunday afternoon. The songs are structurally sound. We hear chord progression and bridges and the deployment of newly learned techniques.

Other than a couple swings for radio, Young Krizzle has put his soul on tape. While he’s invited more outside producers than ever before onto Cadillactica (Saadiq, Jim Jonsin, DJ Dahi), you get the notion that he’s still at the helm. K.R.I.T. flexes his musical chops especially on the straight up soul records, “Third Eye” and “Angels,” but his calling card remains country rap tunes like “Mo Better Cool” and “Mind Control.” He continues to push his own brand, born and bred in the trunk of a Seville, straight outta the Sip. Unless the label decides to really open that budget and clear more samples, it’ll be difficult to get all the way back to that Return of 4Eva sound, but if growth is the goal, Cadillactica extravagantly achieves.

“Cadillactica” Will Be Available Everywhere Monday, 11.10.14!